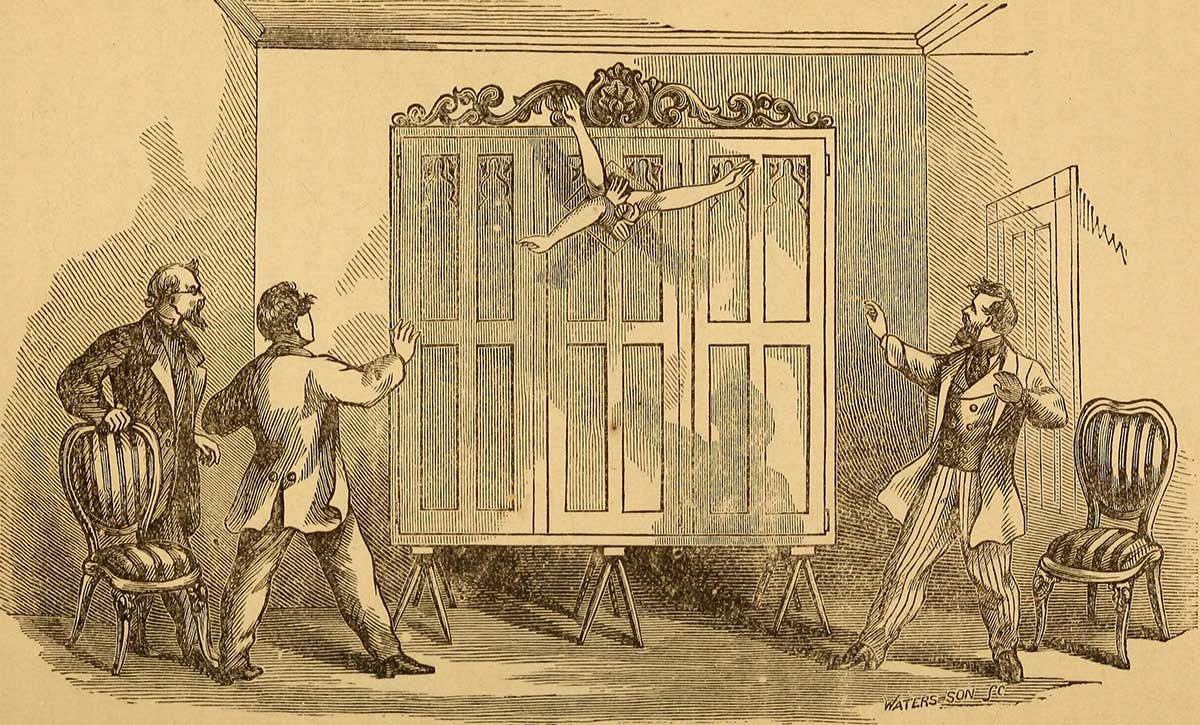 Creating a Spirit Cabinet for The Speakeasy

A few months ago I got a call from Nick Olivero, a friend of mine (and more importantly, the producer of Kevin Blake Wonder Show at Club 1923) asking for some help writing a historically accurate cabaret act for The Speakeasy, an immersive 1920s theatrical experience being produced in a beautiful new space in North Beach in San Francisco. Nick is the producer, creator, and writer of The Speakeasy, and wanted a spiritualism act to put on the stage. I recommended we create a Spirit Cabinet.

The Spirit Cabinet was an act popularized in the wake of the spiritualism movement, a phenomenon that started with an enterprising couple of conwomen known as The Fox Sisters. These two fraudsters claimed they could communicate with the spirits of the dead, which apparently manifested themselves with “rapping” noises that were heard in the sisters’ presence.

Taking the movement to a much greater end were the Davenport Brothers, a couple of entertainers who continued the tradition of starting a double-act with the literally the first person you meet. Ira and William Davenport lived not far from Hydesville, NY, where the Fox Sisters lived, and a few years later in 1854 they started making similar claims.

They became famous traveling entertainers with their creation, The Spirit Cabinet. The Spirit Cabinet was a well-named piece of stage furniture. The basic procedure involved the brothers sitting on either ends of the cabinet and being tied to their chairs by audience members. The cabinet would hold various instruments and other things for the spirits to throw around. When the doors were closed, impossibly, the instruments would be heard playing, pots would bang, and bells would ring.

Over the last 150 years The Spirit Cabinet has become a popular act in many illusionists’ repertoires, from Harry Kellar to David Copperfield to Derren Brown. It’s a great piece of interactive theater, and it was great to create our own for The Speakeasy.

You can see our creation (and yours truly!) performing this historical masterpiece live on stage during The Speakeasy, running Thurs-Sun for the foreseeable future. After the first few weeks of performances, I will be training an actor (and swearing him to secrecy) on how to do the illusion in my stead.